In addition to enabling and disabling IoT Monitoring, you can also configure the display names of network requests and exclude network requests matching given criteria from being monitored. 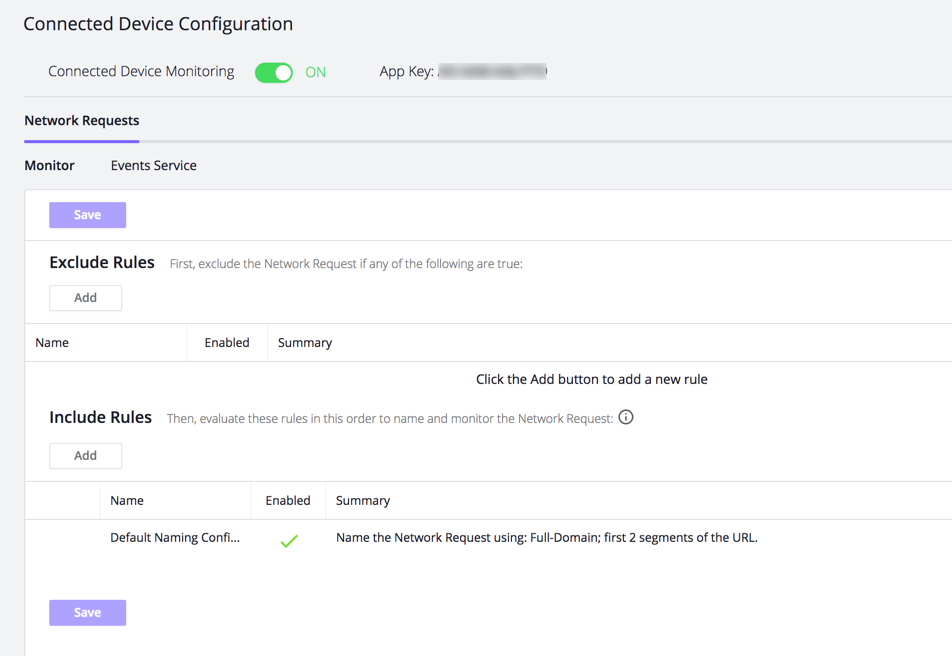 From the Configuration page, click the Monitor tab if it's not selected already.

For example, if an application makes this HTTP request: http://myapp.com/friends/profiles/12345

The default name that is displayed in the Controller UI for that request is: myapp.com/friends/profiles

If this is adequate for your needs, you can leave the default as is. The naming rules you configure here apply to all the IoT applications that are in the same IoT App Group.

You may want to configure a different default rule for naming your network requests to help you visualize the parts of your application more clearly. The task is similar to configuring naming rules for business transactions on the server side. Try to group logically related requests together while keeping unrelated requests in separate groups.

The default configuration covers how all your requests are named if you do not customize them further.

By default, the same request naming rule is applied to every URL that your application requests. If you want to apply different naming rules to different URLs, create include rules.

For example, if some requests call your own in-house server and others call out to a third-party API, you may want to see all the third-party API calls as one network request and use the default naming rules for the calls to your own server. You would create a custom naming rule that matches the third party calls and uses only the host in the default rule name or perhaps also include certain query parameters.

Creating an Include Rule

The following rule creates a custom match rule for requests in which the URL contains "inventory". This rule uses the protocol, the subdomain and the third and fourth segments of the URL in the network request name. 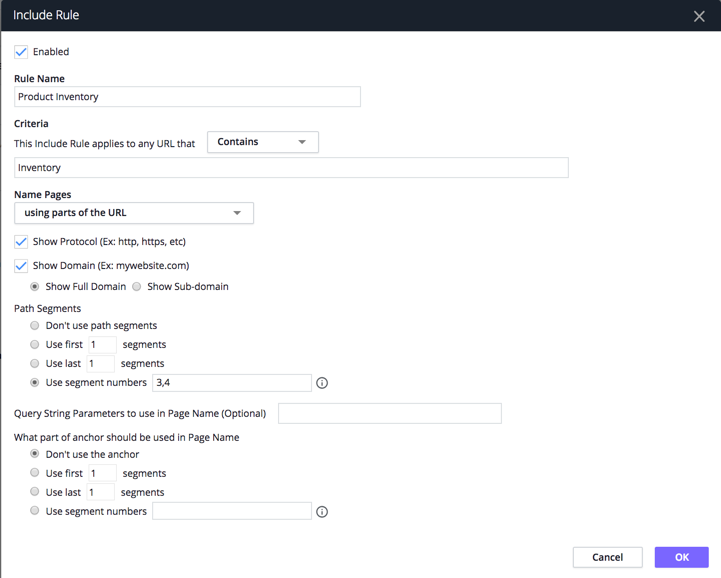 You can temporarily cancel the application of a custom naming rule by clearing the Enabled checkbox in the custom rule configuration. In this case, the default naming rule is applied to requests that would have been named by the disabled custom rule. To remove the rule permanently, select the custom rule in the Custom Naming Rules list and click the Delete icon.

If there are certain types of requests that you do not want to monitor, create custom exclude rules for them based on the URL and/or the application name. Excluded network requests are not reported or counted toward the network request limit of 500 requests per controller application.

Rules are evaluated in the order that they appear in the include or exclude list. You can change the priority of the rules by dragging and dropping rules towards the top (higher priority) or towards the bottom of the list (lower priority). Custom rules are always evaluated before the default naming rule, beginning with the custom rule that has the highest priority.

Your IoT app may make various kinds of network requests, and not all of them may be equally important to monitor in detail. For example, any requests to Google Analytics that your app may make are useful but probably aren't as important to analyze as the requests it makes to your backend.

To manage the impact on your overall Events Service usage, you can create rules which specify which of these network requests should be sent on to the Event Service, either by excluding a request entirely, including a particular request or a sample of that request types by percentage, or by simply allowing the request to be sent on.

In general, the behavior follows this pattern: