This page describes the steps for adding custom metrics using a shell script and includes an example.

Before creating your own extension, review the extensions that have been created and shared among members of the AppDynamics community. New extensions are added continuously. It is possible that someone has already created what you need or something close enough that you can download and use it after making a few modifications.

To create a monitoring extension using a script:

The Controller has various qualifiers for how it processes a metric regarding aggregation, time rollup, and tier rollup. There are three types of metric qualifiers:

To add a monitoring extension script:

Create a Subdirectory Under the Machine Agent Monitors Directory

For example to create an extension that monitors open files in the JVM, create a subdirectory named "openfiles" under <machine_agent_home>/monitors. The structure looks like: 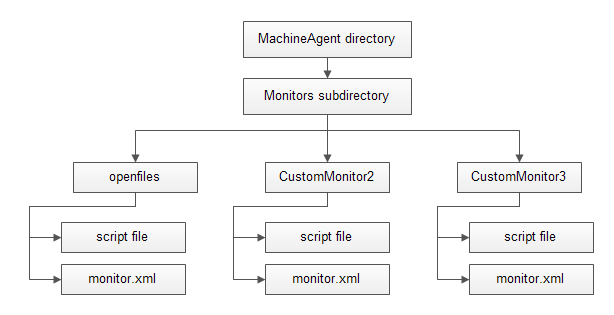 A script writes data to STDOUT. The Machine Agent parses STDOUT and sends information to the Controller every minute. Use these instructions to create the script file:

Copy the Script File to the Subdirectory Created in Step 1

Ensure that the Agent process has execute permissions for the script file and for the contents of the file.

For each custom monitoring extension script, create a monitor.xml file. The monitor.xml file executes the script file created in Step 2. You can edit the following sample file to create your own file:

Copy the monitor.xml file to the Subdirectory Created in Step 1

Ensure that you have correctly configured the Agent in the controller-info.xml file and on the Agent start command on the command line. See Database Agent Configuration Properties

To verify the execution of extension, wait at least one minute and check the metric data in the Metric Browser.

To create a custom monitor for monitoring all the open files for JVMs: